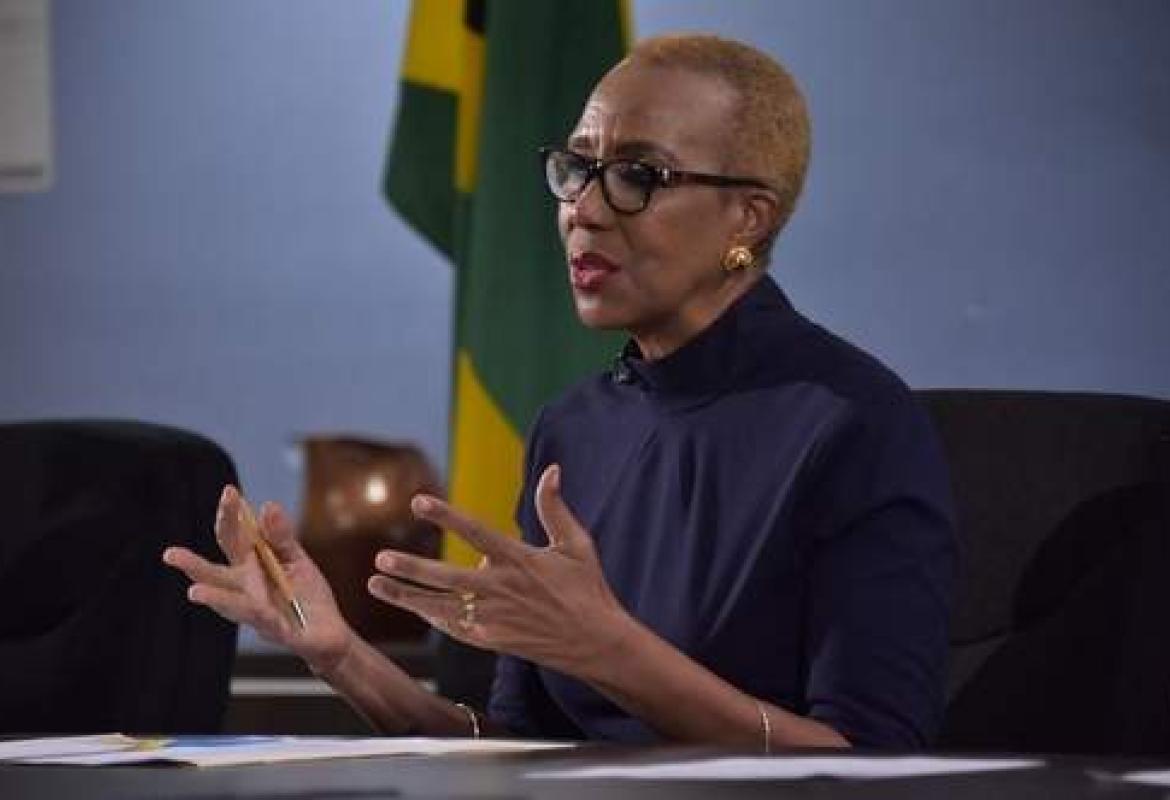 Minister of Education and Youth Fayval Williams outlines the objectives of the Safe Routes To School Safety Club, which will be funded by the Government of Jamaica’s Integrated Community Development Project-II.
News Detail

The Jamaica Social Investment Fund (JSIF) initiative, which is funded by the Government of Jamaica's Integrated Community Development Project (ICDP-II), will be introduced in seven primary schools across the island.

A statement from JSIF said the Road Safety Clubs will be formed to promote advocacy and behaviour change for students and the community. 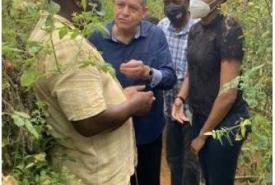 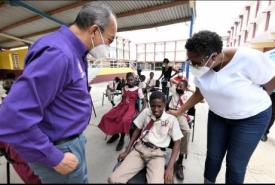 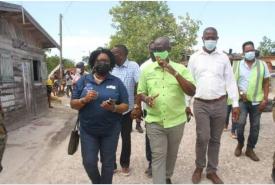 SAVANNA-LA-MAR, Westmoreland — By the second week of March, a multi-agency meeting should be held to map out a plan t 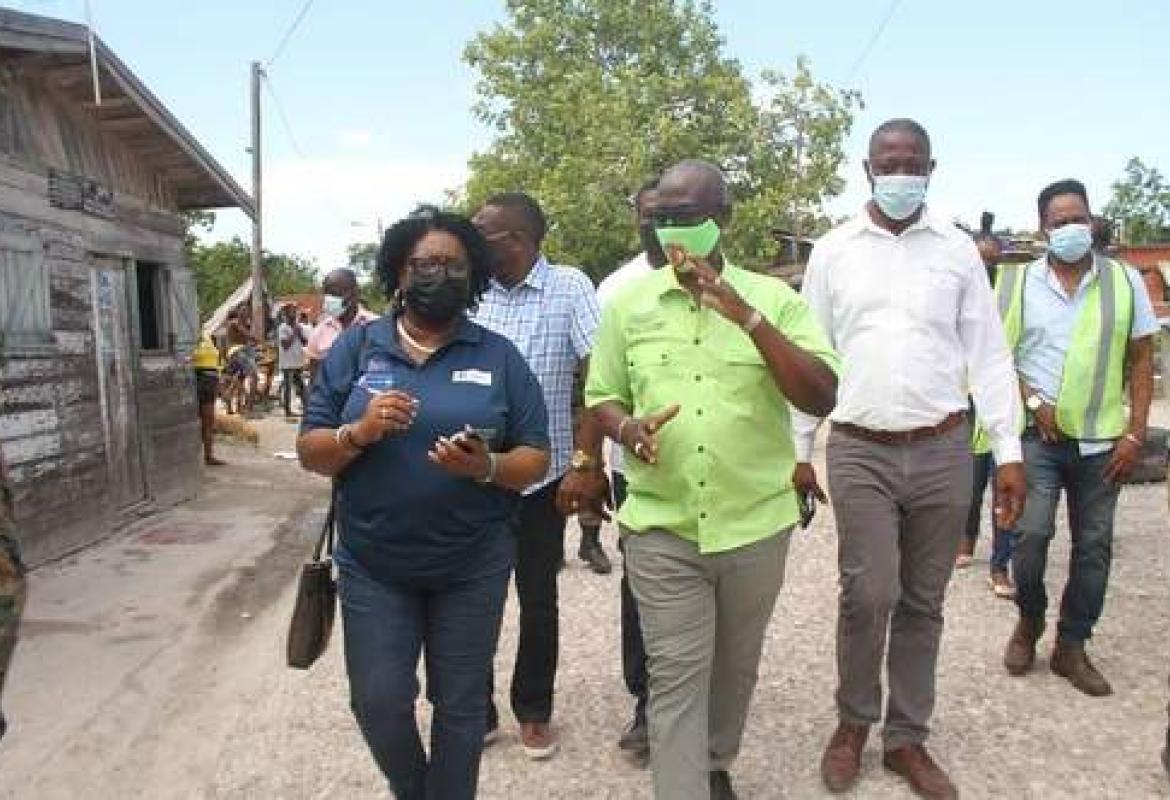 By the second week of March, a multi-agency meeting should be held to map out a plan to ensure that crime-plagued areas of downtown Savanna-la-Mar will get the most out of social intervention initiatives planned to complement the zones of special operations (ZOSOs) put in place in early January. 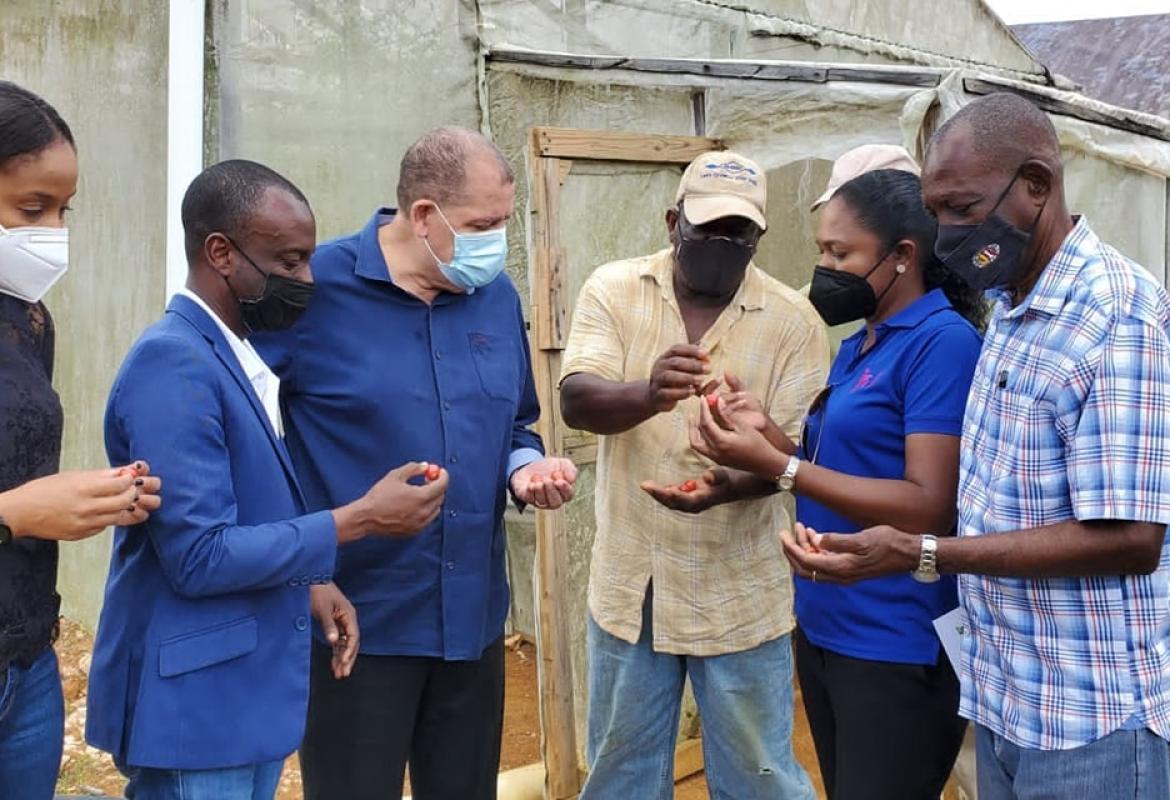 Member of Parliament for Manchester Central Rhoda Crawford and Minister of Transport and Mining Audley Shaw recently toured the Content Greenhouse Cluster, which has been in operation from 2017 under the Jamaica Bauxite Institute/ Jamaica Social Investment Fund Greenhouse Cluster and Water Harvesting Project.

The project is a part of the Rural Economic Development Initiative funded by the World Bank. 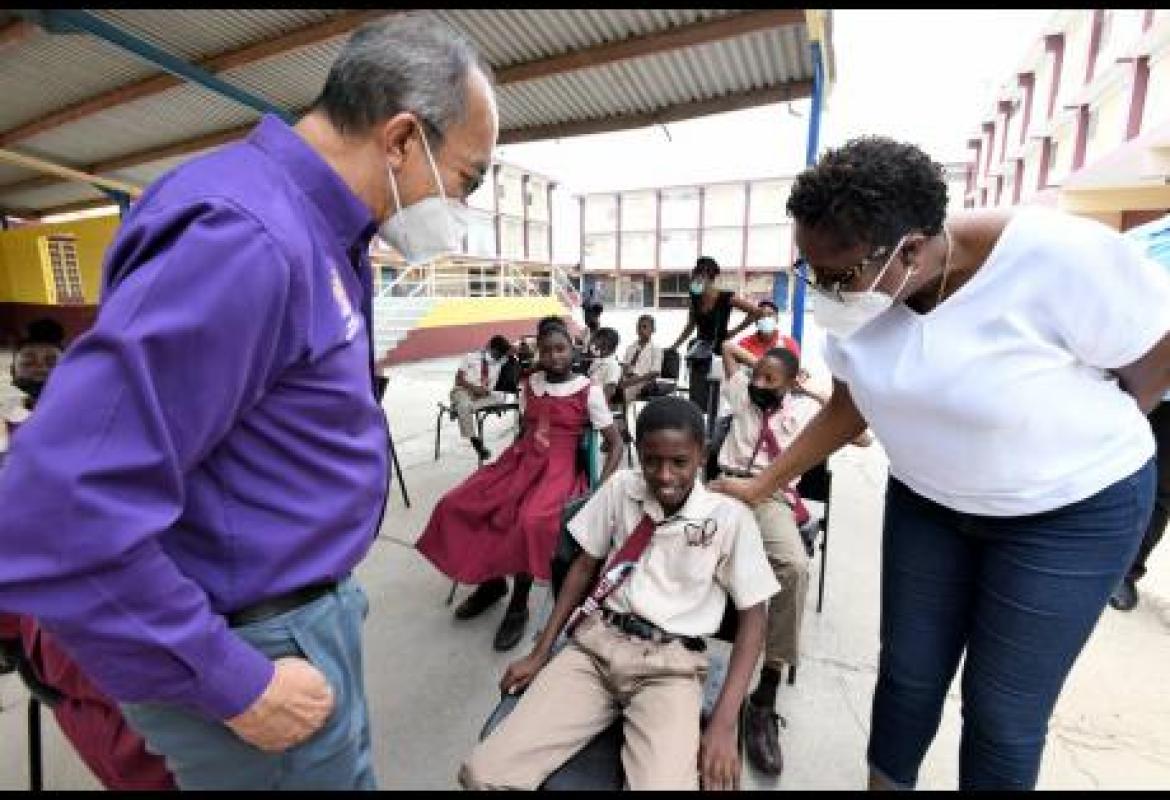 Residents of Greenwich Town have lauded the Government for the physical infrastructure upgrades the community has benefited from, through the build phase of the zone of special operations (ZOSO).

JSIF also implemented a solid waste management project valued at $4.1 million, where 26 environmental wardens were trained and employed. One skip was also constructed and placed in the community.

The Salt Spring community, on the outskirts of Montego Bay, has for long been an area plagued with crime.  However, in stark contrast to the images of a volatile community, Saturday February 26, 2022 was a day of calm and celebration. 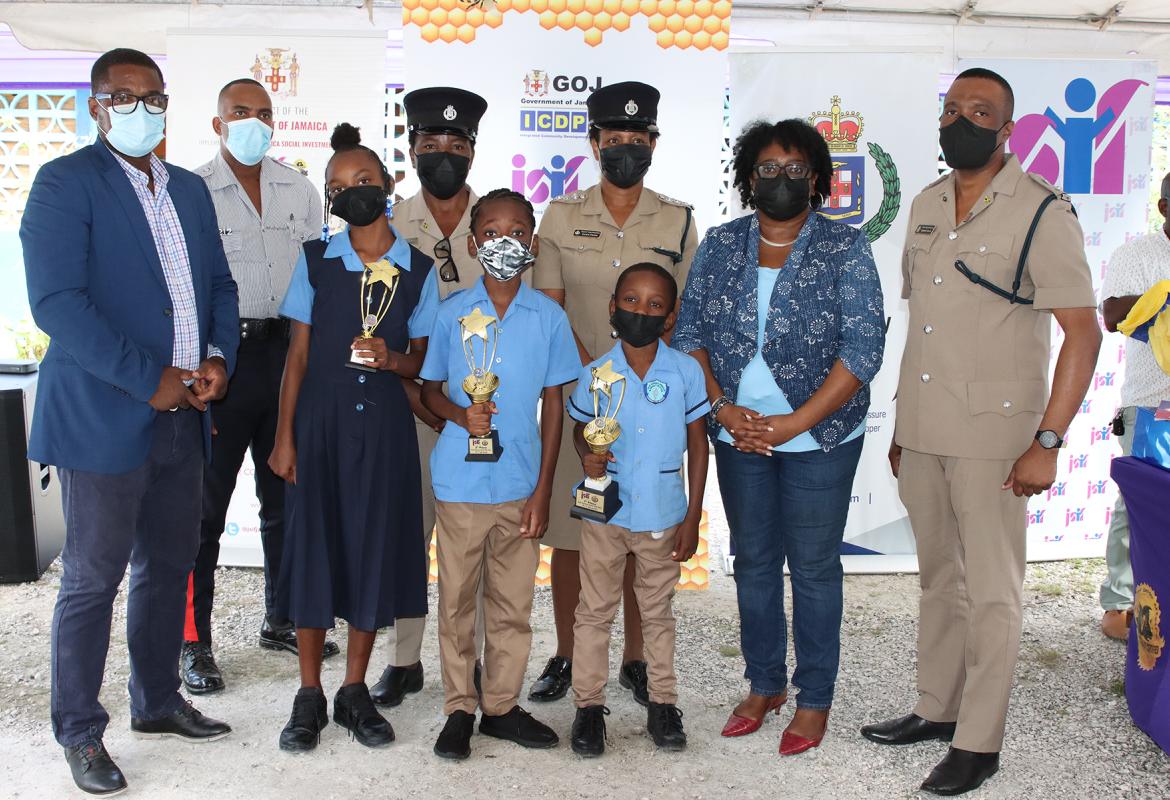 The Salt Spring community, on the outskirts of Montego Bay, has for long been an area plagued with crime.  However, in stark contrast to the images of a volatile community, Saturday February 26, 2022 was a day of calm and celebration. It was the culmination of months of community effort along with the support and guidance of the Jamaica Social Investment Fund (JSIF), along with the Jamaica Constabulary Force at staging a Community Spelling Bee competition among the High and Primary schools in the parish.  The finals were held on Saturday at the beautiful Salt Spring Primary and Infant School.

The official partners in this project, which falls under the JSIF/ Government of Jamaica/Integrated Community Development Project (ICDP-2) are the Ministry of Education and Youth (MoEY), Salt Spring Primary School, the Jamaica Constabulary Force (JCF) and of course the JSIF.

The critical over-arching objective of the ICDP-2 project is to promote public safety transformation by providing basic infrastructure and social services to 8 communities in the parishes of Kingston and St. Andrew, Clarendon and St. James.

This specific sub-project supports community safety and security, by strengthening the capacity of the residents, through community groups, to plan, implement and sustain initiatives for this cause. The Spelling Bee Competition is two-fold as it is a modality used to engage and assist children within the Salt Spring community, in improving their literacy through the Spelling Bee Competition. It is also an avenue used to facilitate the launch of the Salt Spring Police Youth Club by attracting membership from those who participate in the competition.

27 students participated in the overall competition, with 8 ending up in both finals.  With two distinct categories, Primary School contestants between ages 9-12 and High School contestants between ages 13-17 years, the finals were highly competitive, especially among the younger primary school children (all of whom were from the Salt Spring Primary School).  In the end, the battle was between Rojaun Craig and Janoi Chambers, each 9 years old, with Rojaun taking the top prize of the parish trophy for the age group, tablets and several others, along with a surprise cheque from the Member of Parliament, Mr. Heroy Clarke of Central St. James.  Rojuan’s mother, Rhonda Craig was on hand to witness her son’s victory. She was so overjoyed.  In conversation with her, she said “he is one of my two children.  A loving child. He loves school and so enjoyed the preparations for the spelling bee competition.  I am so proud of him and plan to support and motivate him along with the rest of my family”.

The High School competition was won by Olesia Sandcroft of Irwin High School which saw her copping the coveted parish trophy along with a tablet from JSIF among other goodies, also including a surprise cheque from Member of Parliament Mr. Clarke.  Speaking with Olesia’s mother, Ms. Malvareen Haughton, she was so proud of her daughter, who she described as very smart, shy and home-loving and plans on becoming a pediatrician.

In his remarks at the ceremony, Mr. Clarke spoke convincingly of his own journey as a kid and how it was his membership in a community youth club that enabled him to fund his exit exams from high school.  He encouraged all the young people to get involved with the club in their area, as they can only benefit from the networking and life skills learned on account of their membership.

The Constabulary Force was well represented at the ceremony.  In attendance were, Mrs. Natalie Palmer-Mair, Deputy Superintendent of Police, representing the Acting Commissioner; SSP Vernon Ellis of the St. James Police Division; DSP Angela McIntosh-Gayle of St. James PD among others. They used the opportunity to re-launch the Jamaica Constabulary Force Police Youth Club.  The objective is to have these clubs established all over the island, re-engaging our young people in positive activities and serving as critical agents in developing our young minds toward service and success, while honing their own skills at establishing and maintaining positive relationships.

JSIF was represented at the celebration by its Senior Manager, Social Development, Ms. Mona Sue-Ho who, while thanking everyone for the extraordinary collaborative efforts that made the day a reality, spoke passionately about the need for continued collaboration in order to restore the beautiful Salt Spring community to its former glory.